"The Inspiration for 'Hope Rising' Came in the Days Following the Mass Shooting.of 17 S

The inspiration for Hope Rising came in the days following the mass shooting of 17 individuals at Stoneman Douglas High School in Parkland Florida on February 14, 2018. For almost two decades, I have watched in horror as mass shootings take place in our schools. Columbine High School (1999), Virginia Tech University (2007), Sandy Hook (2012), Umpqua Community College (2015), and Stoneman Douglas High School (2018) are some of the most memorial incidents, but all the shootings are tragic and a simple “google” search of school shootings in America produces an alarming and depressing list of incidents. I kept thinking, “This time it will change. Now people will have had enough. How can we continue like this?” Still, nothing changed. Time and time again, the cycle would just start anew: Mass shootings led to thoughts and prayers, which led to debates, which left it up to adults and leaders to affect change, which led to no changes, which led to complacency, which led to a few moments of society forgetting what happened, and then finally, the whole cycle starting again with another mass school shooting. I must count myself amongst the complacent. I have watched in horror, but have done nothing. Even as my wife and I raise four amazing children of our own and send them off to school every day, I have sat silently, filled with my own thoughts. What could I do? I am just a band director trying to make a difference in lives, through music. Then the students of Stoneman Douglas High School rose. They did not wait for the adults to guide them. They questioned, they challenged, and they spoke out, and yes, they rose. They have given us all hope that this time it will be different. It has to be. I realized, in a moment of epiphany, that I could contribute to the dialogue, in the best way I knew how: by composing a piece for band that pays homage to the victims and the rising students of Stoneman Douglas High School. This realization came to me just days after the shooting, while I was driving to the college. In that hour-long drive, I was flooded with musical ideas, intentions, inspiration, and a huge emotional experience unlike any I had experienced before. Having never composed a band work before, I did wonder if I was up to the task. Yet, the inspiration was real and the ideas circulating in my head had to be written down. I thought that maybe if I wrote them down I would find that the ideas and inspiration would leave me after a couple of days. They did not. It took me two weeks of constantly writing (during my free time). I could not keep up with the ideas that flowed. And then it stopped, and I had completed the piece. I still can’t believe that this has happened to me: That music poured out of my heart and soul right unto the score paper (all by pencil). Hope Rising not only pays homage to the 17 victims of the Stoneman Douglas shooting, but also acknowledges the inspiration and challenge that the students of Stoneman Douglas have given to the rest of us. As you listen to the piece, notice some of the more prevalent themes of youth, energy, unpredictability, renewal, cycles, anguish, violence, breaking of cycles, renewal, and hope that are represented as musical ideas. The piece begins with just a few voices, as if in the early morning, starting a new day, full of hope, as we often do. You’ll notice the flute begins the main melody. Listen for these notes through out the piece; they represent hope. The opening section builds to a wonderful climax of sound before transitioning to a moment of rest, getting ready for the next section. The middle section of the piece has a lively new theme and represents the energy and unpredictability of youth. Students are full of life and this section strives to capture that sentiment. As the middle section continues, you will begin to hear sonorities that indicate something is wrong. This anxiety, uncertainty, and violence continues to build until it is obvious that things are not what they should be. The climax is one of sheer anguish and violence as 17 gun shots, representing the 17 victims, are heard and break the chaotic soundscape that has been created. One lone voice is left sounding. This begins the final section of the piece. The lone voice is the bass clarinet. Here, the cycle begins again as you hear the opening theme once again. It seems that it will be the same, but this time, it is different. Listen as the trumpet enters with the opening them, then others join. One at a time the voices rise up, each in turn: Bass clarinet, trumpet, alto saxophone, piccolo, flute, clarinet, bass trombone, oboe, French horn, marimba, trombone, clarinet, tuba, euphonium, tenor saxophone xylophone and trumpet. Count the voices: 17. 17 voices rise up and play together as they pay homage to the victims and to all the students who have risen up for change. Soon the entire ensemble is playing, all the themes of promise are represented and it becomes obvious that this time the cycle will break. Things are different and there is joy and victory in the sonorous sounds of the performers. The climax interjects all themes. The ending is one of contemplation and reflection as represented by the repeated figures that provide tension to resolution. And this really becomes the point, doesn’t it? We need resolution, we need change, and we need hope rising

"The Inspiration for 'Hope Rising' Came in the Days Following the Mass Shooting.of 17 S

"The Purpose of Life is to Find Your Gift, The Meaning is to Give it Away" 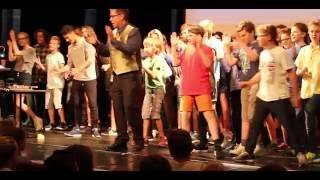 Lewis and Clark College, Portland OR

'The reward for work well done, is the opportunity to do more'

Now You Can Blog from Everywhere!